L’Homme Magazine’s latest issue already dates from February, so I thought I’d better do a mad-dash-group-gift-tour before the May issue comes out. The good thing about these gifts is that not all contributors remove them once a new issue of the magazines comes out. Some even keep offering their older gifts alongside the new one. Nevertheless, I still felt the urge to hurry up.

‘The Look Of The Owl’ tattoo from Altamura, shown here on the NX-Nardcotix David mesh body with Nivaro skin, is not the best tattoo I’ve ever seen in SL, but not the worst either. I don’t really use tattoos, so I’m always going to be a bit ‘meh’ about them. Sure you shouldn’t look a gift horse in the mouth, but nobody said anything about not looking a gift owl in the eyes. 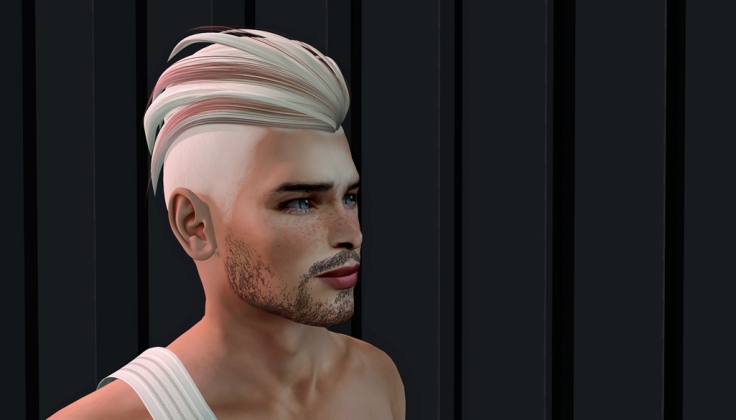 This is the ‘Jasper’ hair from Bad Hair Day shown on the Signature Gianni head with Stray Dog ‘Owen’ skin. I’m so used to Stealthic hair, I find it hard to go back to any hairstyle with less realistic roots. I do like the idea of the two colour huds that come with this hairstyle, letting you choose the base and highlights independently.

‘Chained Deceit’ from [CX] made me wonder if there is a word for an earring that’s connected to a nose ring with a chain and apparently it’s simply called a nose chain. This isn’t really my style, but it’s well made and it was very nice of [CX] to include left and right versions in onyx, gold and silver. For this shot and the next three I switched over to the Dagon hairstyle from Tableau Vivant. I have less issues with the roots of this hair, as it’s a floppy combed forward style.

I’m all laced up with nowhere to go in this harness and briefs from Gabriel. If I’m not mistaken their Christmas gift was the same briefs in red and it sure is awfully nice of Gabriel to contribute to my ever growing SL underwear collection. You can wear these with the Aestehtic, Belleza and Signature mesh body.

This layered shirt from Bakaboo made me look quite bulky so I had to tone down my shape to avoid thigh-sized upper arms. I commend this creator for being daring and bold with their patterns. Compared to some of their other creations, this sweater is rather demure. Another positive is the long list of included sizes: Adam, Aesthetic, Belleza, David, Gianni, Slink, TMP and Fitmesh.

I was delighted to see that the Erwin skin from Stray Dog is one of the L’Homme Magazine gifts for this issue. Of course you still have to buy the matching No. 4 “Buttermilk” applier for your Signature or Belleza body, so it’s a gift that comes with some strings attached, though nobody forces you to buy anything. I always enjoy trying on a new face, especially when it looks this darn lovable on the Catwa Stanley head, even more so with the Reach hairstyle from Stealthic. I was in a modest mood today, so I thought I’d avoid the free willy extravaganza and wear the Classic Boxers from Noche which manage to be both wholesome and sexy at once. My eyes are from No Shirt Sherlock and as I’m still not a fan of the ears that come with mesh heads, I’m wearing my trusty Season 5 Steking mesh ears from Mandala.

That’s it for now beavers. There actually are a few more gifts which I haven’t shown yet, but you can find the complete list underneath the editor’s letter in L’Homme Magazine. The new issue will be out in May, so we don’t have to wait long for a fresh batch of goodies and lots of pages with interesting creative ideas and drool-worthy imagery.