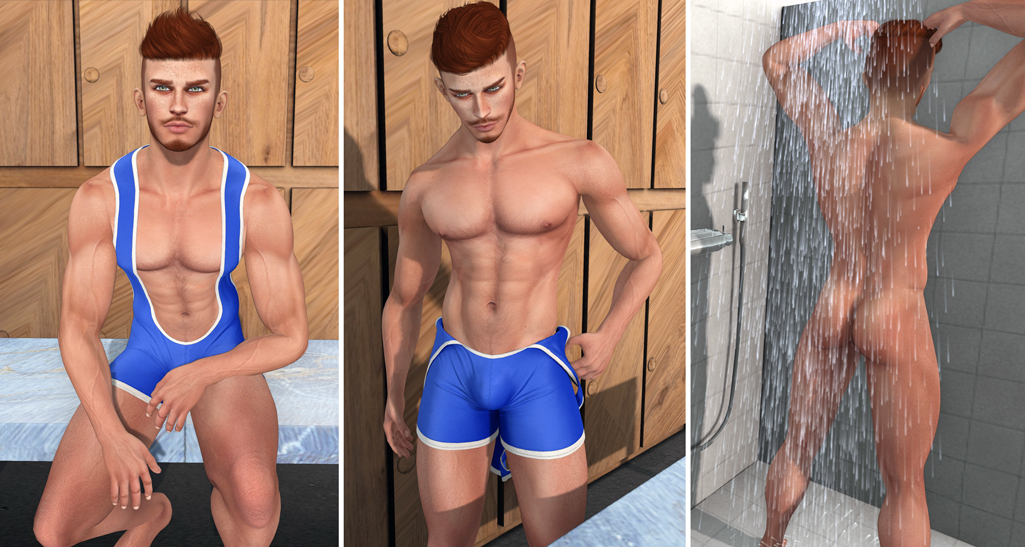 Finally I’m getting around to taking another look at Bakes On Mesh. Some months ago I already played with it, using the beta SL viewer and a hud that could make any mesh body or head suitable for BOM. At that point I didn’t want to blog about it and while I still haven’t had that perfect experience with it so far, now I do have a result that’s worth sharing.

At some point I invested in the L$ 2000 “River” avatar by Aeros. I’m using the word “invested” quite loosely here, as I tend to regard whatever I purchase in SL as consumables. However, in SL terms L$ 2000 is a considerable amount for something that has been gathering dust in my inventory for quite a while, so it was worth the effort to check what it would look like on the Belleza Jake mesh body and Lelutka Andrea mesh head.

To my surprise, it doesn’t look too bad. The face seems to line up nicely and the nipples haven’t slipped too much. The toes are gnarly though and the hands leave something to be desired, but I should point out that in the middle picture I forgot to switch on my fingernails. In conclusion I’d like to say that I would not recommend anybody to buy an Aeros avatar to use the skin on a mesh body, but if you have it in your inventory go take it for a spin. Aeros also has appliers for the Belleza body and Catwa mesh heads at L$ 1000 each, so if you like their skins that may be a better option.

The Belleza body has not yet been updated to BOM, but you can get a free hud for it. Just add it, click it and you’re BOM-ready. The Lelutka head has a Bakes on Mesh button in it’s hud on the “Essentials” tab. All you need to do is click that. Remember that you do NOT wear an alpha layer with BOM. Basically the skin you are wearing underneath the mesh body simultaneously is applied to the body and acts as an alpha. If you notice you’re going red, it probably means you are still wearing an alpha layer. After doing all that, the system eyes were popping out of my sockets, but I used an eyes only alpha layer to solve that issue. To help you get over any issues you may have, Strawberry Linden has a good demonstration video for BOM that’s worth checking out.

My facial hair and freckles all are part of the Aeros River avatar. It definitely is easier to pop on such details without the worry of layers cancelling each other out, a problem that is more common with appliers. The eyebrows are by Identity and I’ve used an Avi-Glam applier on the Lelutka eyes. My hair is “Reach” by Stealthic and I’m wearing the Noche singlet to cover my modesty… well mostly anyway.

And with that it’s BOM’s away! Cheerio.