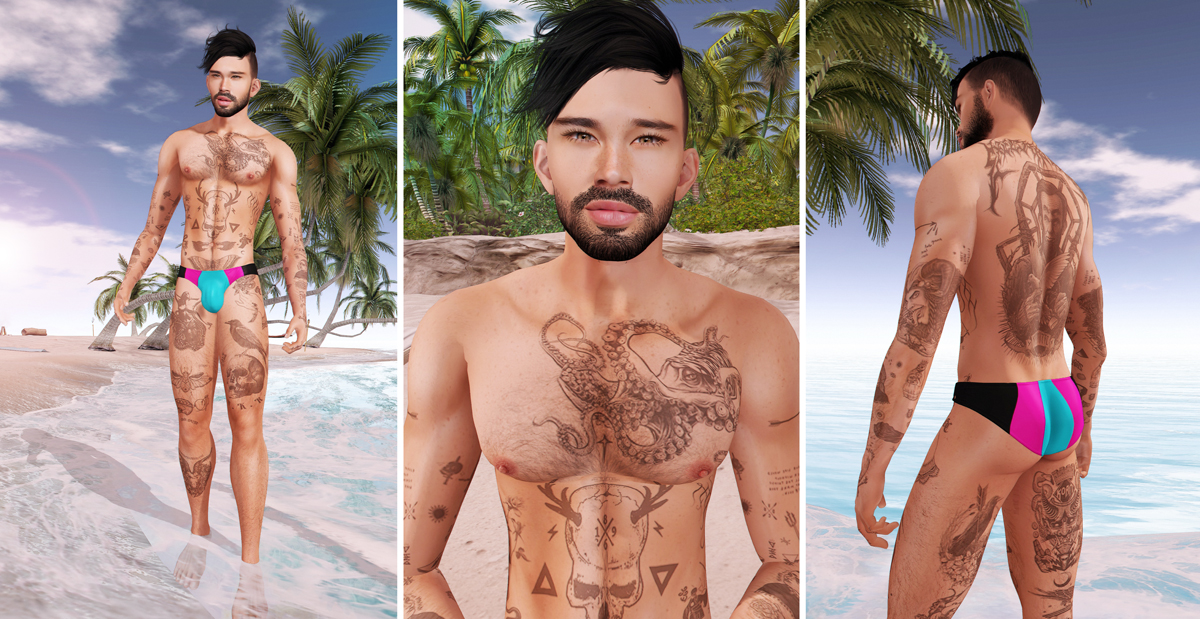 For this episode of Dabbling With Geralt, I won’t be using the Geralt mesh head. Instead, I’m combining the Signature Geralt mesh body with the Lelutka Luka mesh head, because I feel like I haven’t used that particular head enough since I bought it and I never even put a Lelutka head on the Geralt body before. It could be that you are reasonably new in Second Life™ and only just found out how you can greatly improve a standard avatar by going mesh and you just happened to stumble across Signature first and thought: “I guess this will do.” Getting the body and head of the same maker has a certain easy-peasy allure, but while some interesting looks can be made with it (see previous episodes of Dabbling With Geralt), I urge you to try some other heads before you commit to the all inclusive Geralt option. After all, we’re afforded the luxury of demos in SL, so there’s no need to dive in, head first, so to speak.

I can’t quite put my finger on it, but I do find the Signature Geralt mesh body rather suitable for a less muscular look. You can build him up if you like, but I went for one of the leanest looks I’ve created so far. This is turning into a blog post of firsts for me. What definitely isn’t a first for me though, is having a bit of a nag about the neck seam. It isn’t great with this body and head combination. I’ve been playing with the light while I was shooting these images and in certain windlight the neck seam was painfully obvious. Maybe a better result is possible with another skin. Perhaps this is a good excuse for some follow-up dabbling with Geralt.

Support for Geralt isn’t where you want it to be if you like your SL fashion and especially if you enjoy hanging out in your underpants. Apparently several clothing designers aren’t particularly happy with how you have to rig items to work with the Geralt body. There definitely are some big brands like Legal Insanity and Deadwool who have items for Geralt but on the other hand there are “Underwear Greats” such as Noche and Thirst, who have dropped the Signature size completely (even big brother Gianni!). For a brief period Thirst did support Geralt and I got a nice paneled bikini brief from their Januari 2019 Jocked set that hugs Geralt in all the right places. The particular colour scheme I chose for these briefs makes me think “dig the new suit Mrs Wheeler”, but that’s just because I happen to be re-watch Stranger Things.

I Coughed up the SL dough for the fatpack of the Deadwool Kojima Jeans some months ago and I feel like I haven’t worn these enough yet, so it’s good things they include the Geralt size. After putting those on I rummaged around in the shoe closet and found a pair of “Regiment” Boots by Rebellion, also in Geralt’s size. After that I thought it was time to go get something new to extend Geralt’s wardrobe and I went over to Man Cave. After a quick stroll around, avoiding those annoying barking dogs at the entrance, I got a lovely new cardigan by Legal Insanity which, wait for it… includes the Geralt size. That makes this an outfit completely fitted for Geralt. Support for this little fellah might be better than I thought.