Apart from having oodles of fun in Second Life I occasionally also find it to be quite educational. Various organisations offer courses in subjects I haven’t even begun to contemplate. One of the more obvious subjects, which you are constantly surrounded by, is architecture. There are many Second Life creators taking inspiration from real life by recreating historically significant buildings. A nice example is the virtual version of the Farnsworth House, which I was introduced to by a friend and have been renting for a while now. 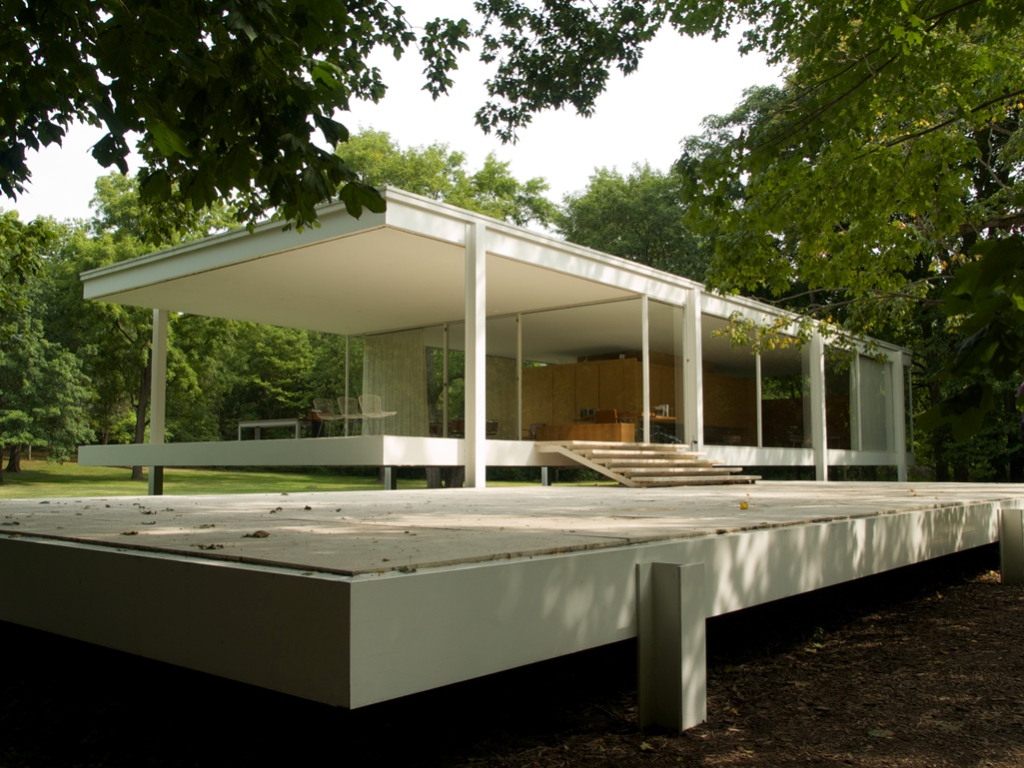 Farnsworth House was designed by Ludwig Mies van der Rohe as a one-room weekend retreat in a rural setting, commissioned by prominent Chicago nephrologist, Dr. Edith Farnsworth, as a place where she could engage in her hobbies — playing the violin, translating poetry, and enjoying nature.
Mies constructed this glass box residence, which he described as trying to create “almost nothing”, along the Fox River in Plano, Illinois and today it has become an iconic example of mid-century modernism and thankfully is protected by the National Trust for Historic Preservation.

My SL version of this house certainly mimics the rural surroundings of the original. It is placed right on the edge of a parcel, landscaped by a self-confessed tree hugger. That is to say, he really likes his trees in Second Life and as luck has it, this kind of building looks at its best surrounded by trees.

Part of the house juts out over water, supported by the vertical beams which have been driven deep into the bedrock. From the inside this almost creates the feeling of being on a cruise liner, while on the outside it means I have a focal point to return to when I go for a swim.

For the interior I found inspiration in the treasure trove of images of the house’s original decor, or at least the architect’s vision of it. I have my suspicions that Dr. Farnsworth didn’t entirely share this vision.  However, Mies van der Rohe designed some of the most memorable pieces of furniture of the mid-century era, so much so that they are still in demand today. The Barcelona chair was originally designed for the German Pavilion at the International Exposition of 1929 and about 90 years later it still feels almost futuristic. Trompe Loeil have done a very nice job replicating this chair for Second Life, both with and without a blanket and an extensive texture change hud so you have an excuse to change the colour scheme of your entire living room whenever you’re feeling a bit restless.

I did some more research on mid-century modern furniture and gathered a nice collection of pieces to partly recreate the Farnsworth house interior I saw in reference material, but as I do not entirely share van der Rohe’s somewhat austere design aesthetic, my approach has been more colourful with just a very slight hint of chaos and a better sense of humour. Fanatik has done a great job recreating Farnsworth House for Second Life, though some corners have been cut. What functions as a short partition wall in this virtual house, in real life was a wardrobe. This was something Dr. Farnsworth had to fight for, as her approach was a more practical one (“I need a place to hang my clothes!”) than Mies’ vision of “almost nothing”. What’s also missing from this SL version, is the bathroom which you will find cleverly hidden in the central wood block of the real house. But lets not bitch too much about what is missing because it is always possible to simply “imagine” that there are things hidden in the central wood block. Overall I like spending time at this weekend retreat, just pottering about, changing little things, lying on the bed and enjoying the open view over the water as the Northern Lights elegantly dance across the sky. I have my espresso machine and toaster oven, so I don’t have to suffer from caffeine withdrawal symptoms or go hungry and I have my laptop, books and art to keep my mind creatively engaged. Quite simply, I think I’ve fallen a little bit in love with this place.