Posted on July 7, 2018 by billybeaverhausen

Roll play isn’t really my thing, but I do enjoy the freedom of being whatever I want to be in SL. During my first year in our beloved virtual world , every now and again I frolicked, flitted and flied around the grid as a fairy, but I never update that fairy look with a mesh head… until now. 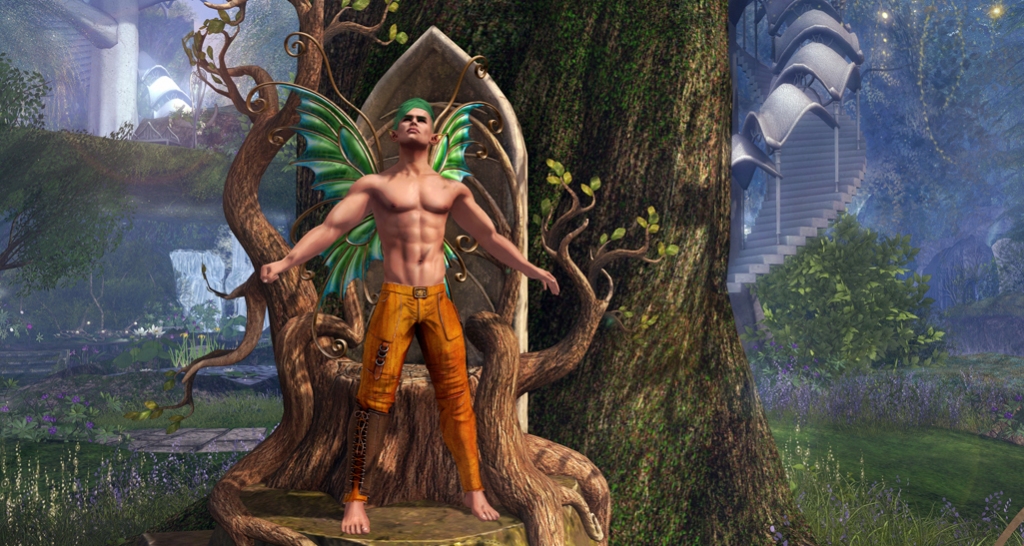 As far as I’m concerned there are no strict rules for what a fairy should look like. You can create a quasi androgynous look by getting the Slink body for example and searching for a skin that doesn’t have strongly defined abs. Alternatively you can take a leaf out of my story book and get the Signature body and combine this with the very athletic looking skin from Birth to magic yourself into a ‘warrior’ fairy.

There doesn’t seem to be a lot of choice in clothing for male fairies. Though the Rover pants by Meva perhaps aren’t technically traditional fairy clothing, I think they work quite nicely with this fierce looking winged creature and they are well made with expertly executed details.

My fairy’s athletic physique goes well with the strong features of the Catwa Stanley head and Birth‘s Lazarus applier. Of course something would be amiss if you din’t have pointy ears. For those I always rely on my trusty Season 5 Steking mesh ears from Mandala. Wings are a bit of a must as well and though I haven’t been doing an awful lot of research to see what’s available in the wings department today, I dare say that the Titania fairy wings by Deviance haven’t lost their luster yet. The Hysteria hairstyle by Stealthic, tinted bright green, finishes off the look.

And now my dearies, I’m flying out of here. Cheerio! *leaves behind a trail of sparkles*

P.S.: Check out Lost Unicorn if you’re a fan of fantasy sims.